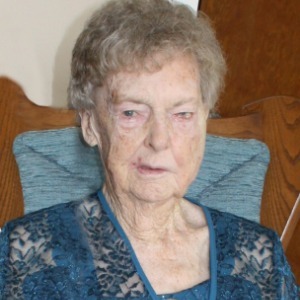 Dora Grant (nee Rutherford), age 90 years, died early Monday morning on August 12, 2019, at St. Joseph’s Hospital, Thunder Bay, with her daughter by her side. She is survived by her sister Rosemary Gormley; three children: Mary Ellen Cain, Charles Grant (Lisa) and Ian Grant (Heather); nine grandchildren: Patrick Cain (Courtney), Hannah Mailloux (Steve), Emily Cain (Tim), Luke Cain (Rachel), Noah Cain (Alanna), Janelle Mann (Jason), Tyler Grant (Hollie) Cara Anderson (David) and Indigo Adam – Grant; and seventeen great grandchildren: Isaac, Elizabeth, Lucy, Catherine, Madeline, Genevieve, Samuel, Scott, Sadie, Levi, Claire, Isaiah, Elijah, Norah, David, James, William and Theodore. She was predeceased by her husband Hugh Grant, companion Stan Todd, parents Charles Smith Rutherford VC, MC, MM and Helen Rutherford (nee Haig), her siblings Andrew Rutherford (Anne) and Isabel Reid, her brothers-in-law Don Gormley and Don Reid, son-in-law Mickey Cain and two granddaughters Joy and Hope Cain. Dora was born on November 20, 1928 in Colborne, Ontario. As a girl, she loved skating, playing ball, sliding down the Colborne hill, and picking apples. She trained to be a nurse at Kingston General Hospital and worked at York County Hospital in Newmarket, Ontario. Hugh Grant asked to walk her home from the Sunday School Christmas Program when she was twelve years old and they were married nine years later. She was married for thirty-five years until Hugh’s death. Together they raised their children in Newmarket (1956-1970) and then Cobourg (1970-1977) and back to her hometown of Colborne (1978-2005). Dora supported her children in their many sporting and school activities and modeled duty, honesty and hospitality. She built a cottage, side by side with Hugh, on Buckhorn Lake. They spent many summers enjoying the cottage as a family and welcoming nieces, nephews and siblings for visits. In 1978 she helped build a beautiful home overlooking the hills of Northumberland and Lake Ontario. Dora was a true partner in these projects—hammering, sawing and putting on the shingles beside Hugh. When the house was complete, Dora’s parents moved in and she capably and lovingly cared for them. While in her care, she escorted them to Buckingham Palace to attend the Queen’s garden party for Victoria Cross winners and many Remembrance Day Services in Ottawa and Colborne. She was an avid curler, good neighbour to many and active in her community and church.  After Hugh’s death in 1986, Dora found love again with Stan Todd who was her companion for 17 years. With him, she travelled, played cards, curled, lawn bowled and enjoyed life.  Over the years Dora battled bipolar disorder, always fighting back with bravery and dignity. She had cancer twice and other health issues, but God was gracious and she recovered to enjoy her life each time. Dora practised and cherished life’s simple pleasures—homemade apple sauce, a well set table, a good game of bridge, and a drive in the country.  She came to live with her daughter Mary Ellen and son-in-law Mickey full time in 2011. While most of her time was spent in Thunder Bay, she travelled and lived in Nunavut with them as well. She spent time in Naujaat (2011) and two years in Gjoa Haven (2016–18). She enjoyed going to church and special activities, eating Arctic char and caribou, and meeting people in these communities.  You are invited to two services to commemorate Dora’s life:  Lakehead Baptist Church Thunder Bay, Ontario (1314 Oliver Road) at 1:30 p.m. on Saturday August 24, 2019. A reception will follow at the church.  A memorial service will be held at MacCoubrey Funeral Home 11 King Street West, Colborne, Ontario at 11:00 a.m. on September 14, 2019. The burial will be at Salem Cemetery. A reception will follow at the Royal Canadian Legion, Capt. Charles S. Rutherford VC, MC, MM Branch 187 Colborne, Ontario. I have fought the good fight, I have finished the race, I have kept the faith. ~ 2 Timothy 4:7

Note: Your message of condolence will appear at the bottom of the page.
MacCoubrey Funeral Home Ltd. reserve the right to delete or remove any comments we find inappropriate or offensive

Condolences to the family on the loss of Aunt Dora. She was the last of my Grandma Reta's generation.

Our sincerest condolences on Dora's passing. We've made a donation to the Heart & Stroke Foundation in her name, a charity near to our heart as well.

Dora's Family:Cherished memories of Dora and her family, Charlie & Kathleen McGuire were very close friends Of Charles & Helen and we shared many hockey games with our son John on the same team as Ian. I loved the cookies on my visits to Dudley Rd. We had hoped to attend the service on Saturday but are in Montreal. I had hoped to hear more about Dora's love of the North.Marg Godawa

Loving thoughts and prayers to you all at this sad time.

Mary Ellen, Charles, Ian, and families please accept my condolences on the loss of your beloved mother. Know that you are in my thoughts and prayers.I have fond memories of the cottage at Buckhorn and think of it when I have blueberries and peaches.Mary Mouse Checkley Ainsworth