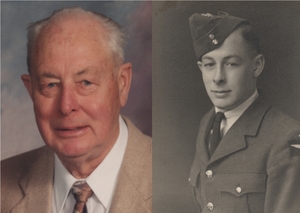 Born October 26, 1922, died March 13, 2019, age 96 years. Predeceased by his wife Evelyn (Freeman), 1925 – 2015. Born in Cobourg, Don attended elementary school in Grafton and Cobourg and High School at the Cobourg Collegiate Institute, later the Cobourg District Collegiate Institute West. Don then joined the Royal Canadian Air Force and was loaned to the Royal Air Force for the duration of WWII. For most of his years in the Air Force Don served as a radar technician on Night Fighter Mosquito aircraft in RAF 157 Squadron. During this time he was stationed at airfields in and around Norfolk England. After returning to Canada Don received his BSc in Mechanical Engineering from Queen’s University, Sci 51’. It was at Queen’s that he met his soon to be spouse, Evelyn Freeman. Married in 1952, they lived in Brockville briefly before returning to Cobourg. Don worked for Eldorado Nuclear, later Cameco, and formally retired in 1985. He then continued to work as a consultant for Eldorado for many more years. Don was proud and loving father of 4 sons; Scott, Bruce, Ross and John and their partners, Pat, Cathy, Karen and Donna. He will be sadly missed by 9 grandchildren; Neil, Laura (Ian), Jennifer (Jon), Matthew, William, John, Kevin, Anne and Kate. Don is predeceased by his brothers Neil and Arthur and sister Marion (Grant). He was predeceased by his parents Robert Edie and Hilda Trevelyan (Green). In Don’s memory donations may be made to the Northumberland Hills Hospital. A graveside service for family and friends will be held Saturday June 8th at 11am at Union Cemetery, Cobourg.  Condolences received at www.MacCoubrey.com.

Dear Bruce and Scott and all your family.Our sincerest condolences from Ruth and myself.

Sorry about the passing of your Father John.

My sincerest condolences to the Runciman family.

Very sorry to hear of your loss. A wonderful man.

I am sorry to hear about your Dad; you were so lucky to have him for so many years. Thinking about you at this sad time Christine (LaBrash) Thompson

Donald was always an informed person to talk with in his quiet and unassuming way.A loss: